Utility to include a codename for your application based on version (up-to v10.X.X-X). This works great alongside version bump utility: grunt-bumpx [https://github.com/Ragnarokkr/grunt-bumpx/] for keeping 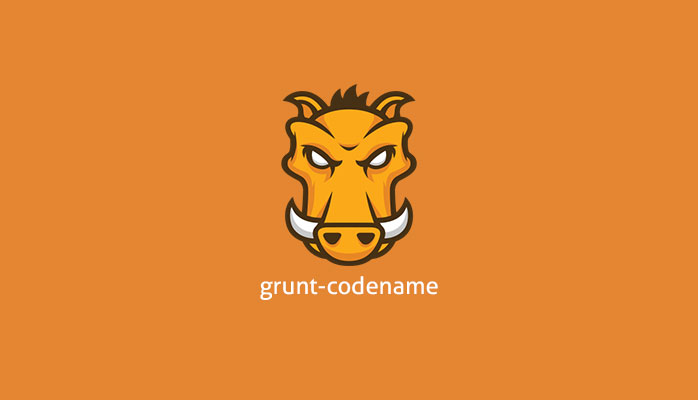 Utility to include a codename for your application based on version (up-to v10.X.X-X).

This works great alongside version bump utility: grunt-bumpx for keeping your version numbers and names up-to-date with each build.

Included codenames and patch names created with the help of the excellent codenamegenerator.com website.

This was created by us in late 2013 and has had over 1,500 downloads to date, but as we've just released the Gulp.js version “gulp-codename”, it made sense to publish this as well.

The utility will create a codename and a patch name based on your version number.

So; effectively your version is "0.0.1 Perseus Amber (Ithomiid)".

So; effectively your version is "0.1.0 Bronze Marklar".

To view the source; check out the git repository:

If you haven't used Grunt before, be sure to check out the Getting Started guide, as it explains how to create a Gruntfile as well as install and use Grunt plugins. Once you're familiar with that process, you may install this plugin with this command:

Once the plugin has been installed, it may be enabled inside your Gruntfile with this line of JavaScript:

The project follows the SemVer guidelines for version numbers; specifically following: ‘1.2.3-1’ being ‘MAJOR.MINOR.PATCH-BUILD’.

In your project's Gruntfile, add a section named ‘codename’ to the data object passed into ‘grunt.initConfig()’.

codename allows to set the codename and patchName based on the version number of the configuration files (package.json, manifest.json, etc.) in your project. Only JSON files are supported, and each file must have a ‘version’ field compliant to SemVer guidelines; specifically following: ‘1.2.3-1’ being ‘MAJOR.MINOR.PATCH-BUILD’.

codename is designed to update your package.json, manifest.json or any other JSON file with a "version" field (configured as noted above).

An example of a manifest.json file is below:

Once codename has been used (with patch names enabled); the manifest.json file would be updated automatically as follows:

Running the task in this way, the ‘codename’ field of each source file will be automatically changed to the correct codename for the build release.

Running the task in this way, the ‘codename’ and ‘patchName’ fields of each source file will be changed to the correct codename and patch name for the next minor release based on the names contained within the user-supplied codenames.json file.